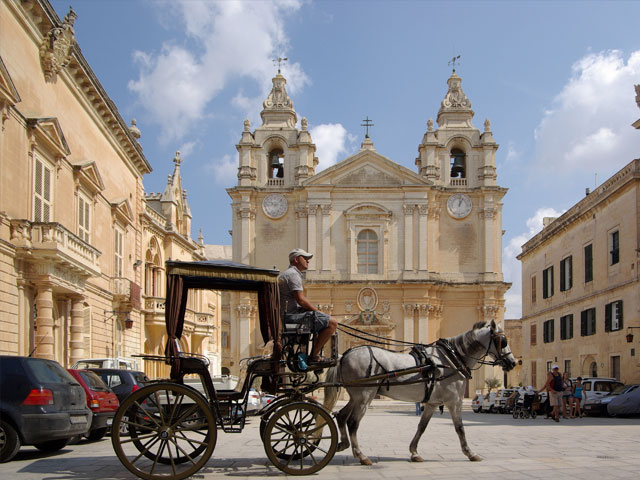 Mdina is one of the prettiest ancient walled cities you will find anywhere. Perched upon one of Malta's highest promontories, it commands a superb view of Malta which never fails to inspire and amaze.
Stroll around its narrow, winding, cobbled streets and you are sure to encounter one or more artists painting a picture... Mdina is a real example where a picture says a thousand words. The magnificent buildings and private chapels bear testimony to the city being known as Città Notabile, the Noble City, because indeed the most exclusive families on the island lived here.The medieval and Baroque architecture, which has been virtually untouched by modern development, bears testimony to the extensive history of Mdina. This is a city for time-travel through history. For about 3,000 years, from the Bronze Age (1,500-700BC), through its transformation by the Phoenicians and the Byzantines, through the occupation of the Arabs, right until the arrival of the Knights of the Order of St John (1530AD), the entire area around present-day Mdina was of great importance on the islands.An unsuspecting visitor could hardly guess how gloriously active the old capital of Malta once was. The city is now at retirement age and Malta's old capital has been nicknamed the Silent City. It is car-free and just naturally prompts you to talk in a church-like whisper.Let yourself be further enchanted by the mellow light of the wall-hanging lanterns in the evening time, and dine in one of the venues located within the historic buildings which dish out local and international treats. During the daytime, visit one of the characteristic cafés and one or another of the local attractions, such as St. Paul's Cathedral, the Cathedral Museum or the Museum of National History.Whatever you choose to do, Mdina will remain a place you will remember.