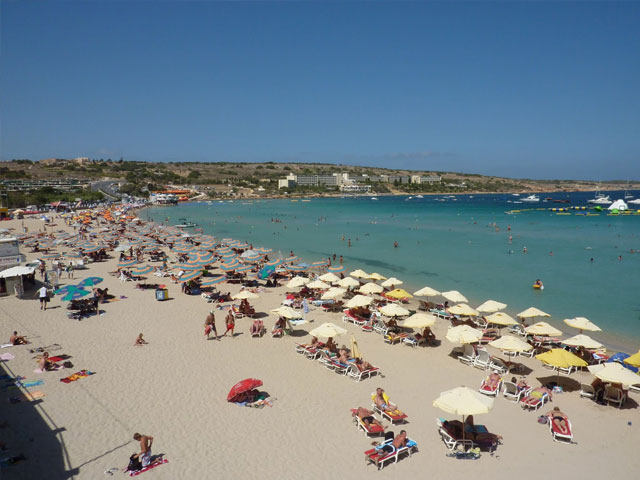 Mellieha, which has been awarded the title of European Destination of Excellence by the European Union, covers one of the largest areas in Malta, taking up most of the north of the island. Mellieha is an abundant town and one of Malta's most picturesque tourist destinations. You can stay in a beautiful hotel in the town centre and have access to several good restaurants and shops selling an array of goods.
While providing very nicely for the tourist who wishes to stay a little off the beaten track, Mellieha retains its traditional allure, since its villagers, ''il-Mellihin,' remain very proud of their popular culture and traditions. Visit Mellieha during August and September to enjoy various cultural manifestations including the village festa and religious processions, fireworks, musical concerts, folk singing and art exhibitions. Or simply meet with the locals, who are renowned for their ironic sense of humour, their friendliness and warm hospitality. They might even invite you to their local band club, sports club or one other of the several cultural organisations or community groups in Mellieha.Visit the commanding Parish Church, lovingly built by its townspeople, and go to the courtyard of the Sanctuary of Our Lady of Mellieha to enjoy the stunning views of Mellieha Bay, or Ghadira (pronounced Adira) which literally means 'puddle' due to the nearby fresh-water marsh that serves as a temporary home to many migrating birds.Mellieha's rural areas even today remain the most beautiful on the islands with the neighbouring hamlet of Manikata being the centre of an Agro-Tourism Project. These rural areas provide much opportunity for rambling walks and exploration. Heritage walks are organised throughout the year in Mellieha's natural parks, and spectacular views are to be enjoyed from areas such as Selmun and Mgiebah, overlooking valleys and slopes which are covered with colourful wild flowers in spring. 'Park tal-Majjistral' is Malta's first natural park and forms part of the Natura 2000 network of protected areas in the EU. There are several beautiful sandy beaches scattered along the entire northern coast and also many archeological sites to visit along the way. Click on the link to the 'Mellieha pocket guide' below for more information about guided walks.Archeological finds indicate that Mellieha has been inhabited since early Neolithic times (3000 B.C). Its natural caverns were inhabited by cavemen until about 870 AD, when raids by corsairs forced the area to become abandoned. It became populated again in the 16th and 17th century, when the Knights built fortifications along the coast to protect the inhabitants who had become attracted to the area by the prospect of exploiting the fertile valleys and seas.Mellieha had always held much merit ever since pilgrimages to the sanctuary of the Holy Virgin Mary had become very popular with nobility and peasants alike, who would flock from all over the island. Now its visitors motives may be more varied, but Mellieha remains a special place to visit and one we definitely recommend.